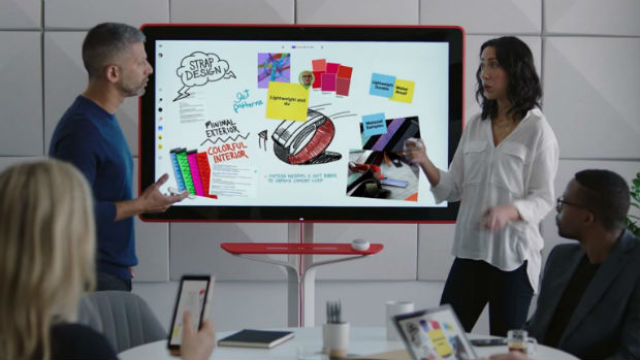 Tech Giant Google Inc has announced the release of its new interactive flat panel, the Google Jamboard. Google, renowned for being an innovator and certainly a leader in the world of tech this time, in our opinion has come up short. Not available for another six months, but there is an early adopter program for those keen, the new Jamboard offers features that specialists in this space such as TouchIT Technologies has been offering for some time and at a fraction of Google’s estimated $6K price tag.

There is no doubt that the tech giant has designed a good looking piece of hardware but is it style over substance? Centred around it’s Chrome OS and Google’s rebranded “G Suite”, the Jamboard offers its users through both Android and IOS Apps the ability to “Join the Jam” or collaborate in layman’s terms.  You can also use Google Hangouts, Google Drive and Google Docs as you would expect, their hardware piece is entered around their software, exactly the same approach Microsoft took with their Surface Hub product. This collaboration element that the Jamboard portrays is nothing new. TouchIT Technologies has a range of Interactive LEDs that have been doing this almost exact same thing in Schools and Businesses around the World for the last few years, and with a 55″ at under $3K, its half the price!

Google has incorporated some ‘cool’ features such as TJ Varghese explains in his blog “It automatically recognizes the difference between using the stylus to sketch or the eraser to start over, and neither require batteries or pairing. Jamboard can also sense when you’re using your finger to wipe work off of the screen, just like a classic whiteboard.” He goes on to explain that “Jamboard (is) a collaborative, digital whiteboard that makes it easy for your team to share ideas in real-time and create without boundaries. We’re moving the whiteboard to the cloud.” This is something that we at TouchIT have been doing for the last two years.

TouchIT Notes when combined with the TouchIT LED allows you to collaborate both locally over your wireless network as well as via the cloud on Android, IOS, Windows and MAC devices. You can share documents and content, annotate collaboratively in real-time. For the Chrome OS users, Oktopus allows almost the same functionality, something TouchIT Technologies has seen a huge uptake in from School Districts, especially in the United States. Chromebooks, with their low price tag have been proving the tool of choice for the education market and sales are now outstripping MAC sales according to the latest figures from analyst firm IDC

To see what TouchIT Technologies can do with Chromebook collaboration, check out this post

Drawing from our experience at TouchIT Technologies, whilst we’ve seen the adoption of Chromebooks and Chrome OS in the Education Market, it isn’t something that we have seen with our customers in the Corporate World. The Corporate World from what we have seen is still very much the playground of Microsoft and Apple. How will the Chrome-based Google-centric Jamboard be perceived by the Corporate IT Administrators? Only time will tell.

Google isn’t the first tech giant to enter into the Interactive Flat Panel (IFP) arena, traditionally the playground for smaller specialist companies such as us. Microsoft took its first steps with the Surface Hub product last year, now Google has followed when some of the other well know larger brands such as Samsung and Sharp have reduced their interactive portfolios.

This is certainly an interesting time to be an IFP manufacturer, especially when we offer products that do almost the same thing, at a fraction of the price. Bring on the Tech Giants with their bottomless marketing budgets promoting our space! 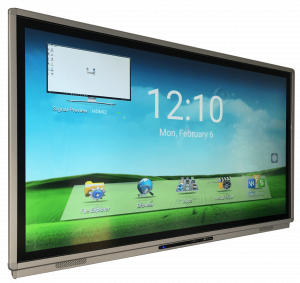 With the emergence of the new Y Series from TouchIT Technologies, there are even more reasons for you NOT to consider the Google Jamboard. The Y Series is the 6th generation of Interactive Flat Panel that we have manufactured and they keep getting better and better. It is the thinnest, sleekest, most advanced Interactive Flat Panel we have ever made.

The Y Series is the first series that we have launched that now has an on-board Android Operating System. Why does this matter? I hear you ask yourself. The truth is that Android opens up a whole host of possibilities for us. Firstly, we are able to use Android to control the screen. What I mean by this is that the Andorra OS can now control the On Screen Display (OSD) so you can change things like the volume and brightness by touch rather than having to use the remote control. You can also witch seamlessly between your Computer and the Android OS, again at a touch of a button.

Android is really all about Apps and to coincide with the launch of the Y Series, TouchIT Technologies has also launched its own App Store – the TouchIT App Store. Available as both a web store and a native App, the TouchIT App Store gives our uses access to almost 1000 apps of appropriate content directly from the Interactive Flat Panel. Teachers can download and install them totally free of charge by logging into the store. There is now no shortage of content available for the TouchIT Y Series Interactive Flat Panel

Lastly, The onboard Android OS allows us to offer our users “PC Free” operation of the Interactive Flat Panel. What this means is that you dont have to have a computer connected in order to use it. We’ve also launched in tandem the Contribute annotation App. It is the simplest annotation App around and becomes that “Dry Erase Marker” or the “Piece of Chalk” – you simply open the App and annotate. You can of course export your annotations to PDFs and Images but we’ve kept this really simple.

The Y Series LED from TouchIT Technologies really does push the boundaries of technology, but more importantly with a 65″ price tag at under $3500 bucks, why would you even consider the Google Jamboard?

TouchIT Technologies later this month is due to release its Contribute Cloud collaboration and lesson delivery platform; a further reason that you don’t need a Google Jamboard. The Contribute Cloud software is as the name suggests, cloud based, and allows teachers to create lessons from almost any file format, bring them into one place and then distribute them for whole class teaching to the students. All this is done via a browser which means that students can connect to the collaboration session from any device that has a browser; PCs, MACs, Android, IOS, Chromebooks, you get the picture. The students then can see on their own device exactly what is being shown on the TouchIT LED at the front of the class. If allowed by the teacher, they can then collaborate and their annotations are shown on the LED that they have made from the comfort of their own seat. For the Google Classroom user, Contribute Cloud also links in with Google Classroom allowing the importing of any class lists that you have in the GAFE suite with just one click. All of this collaboration comes at NO COST, it is totally free. Yet another reason why you don’t need to buy an expensive Google Jamboard.

From what we can see with the Google Jamboard, the whole idea is that you use their hardware and only their hardware. What if you want to connect you computer? Well, in essence, you cant. What if you want to connect a student machine. In essence, you can’t. It does seem very odd but that is how they have gone about designing the product. What we do at TouchIT Technologies is really promote the connecting of your own computer to the LED, with no drivers or calibration, it makes it really easy. We also have front inputs on the LED itself so that you can also connect a student machine without disconnecting the teacher machine.

Perhaps the “coolest” feature that we have included in Contribute Cloud software is the ability to Cast to the LED and also Multi-Cast your students. What this means is that if Student A has a Google Slides presentation he or she wants to show on the LED, the teacher can quickly and easily show this just by clicking a button on the Contribute Cloud software. Perhaps Student A and Student B have done a problem but solved it in different ways. With our multi-casting feature we are able to have the two student’s screens showing on the LED at once. It is not limited to two screens by the way, this is just the example we have given. 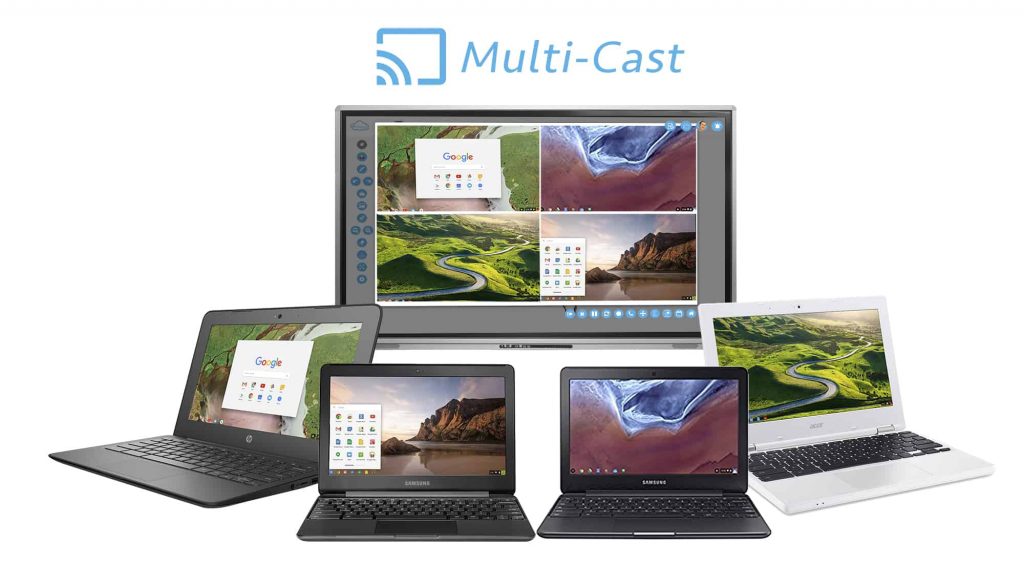 If you are looking to really make use of different devices in the classroom, then the Google Jamboard is not for you and you should be looking more at the kind of LED that TouchIT Technologies manufactures. 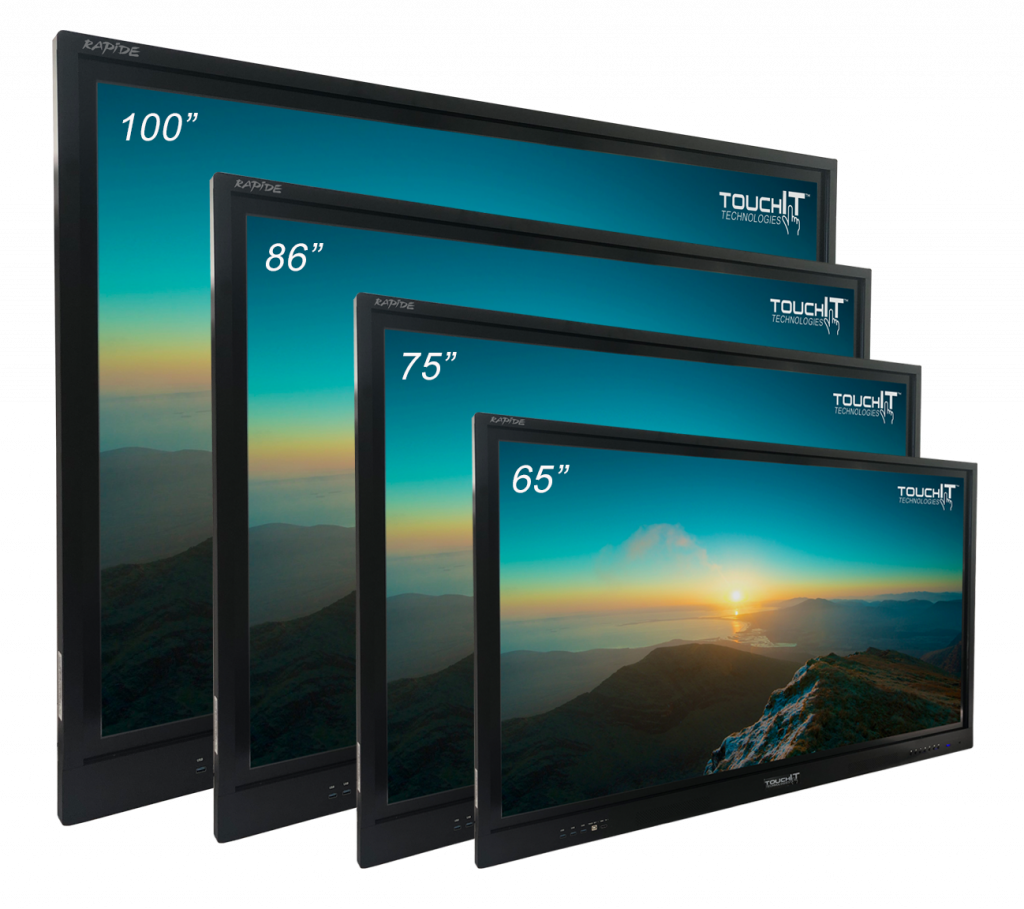 Well, a year on and time to update this article once again. We’ve released a new Interactive LED, the TouchIT Rapide and I thought it would be a good reason to add to this article why you don’t need a Google Jamboard.

The whole Ethos behind the Google Jamboard is that it is a standalone ecosystem – you don’t need anything else, just the Jamboard and the software. Well, we beg to differ. that said, the new TouchIT Rapide LED is more than capable and more than powerful enough to be that standalone collaboration tool. With the new Android 8 OS, you don’t need to connect a computer. Hey, did we mention that we’re a fraction of the cost of a Jamboard too? Well, we are!

Ok, so now we’re a standalone, let’s dig a little deeper to why you don’t need a Google Jamboard. So, Contribute Cloud. We’ve touched on this earlier in the article but for the first time, with the TouchIT Rapide LED, you don’t have to have a computer connected to use it. Open the Chrome Browser, yes, the one from Google, and login to your Contribute Cloud account and off you go. All of the features of Contribute Cloud are now available directly on the Android OS. Quite fully really that we are pitching a product, based on the OS from Google and using the Browser from Google but with our hardware, we can save you a fortune and accomplish the same tasks!

We’ve also mentioned that our App Store is something that you are really missing out on if you are looking at a Jamboard. We’ve got 100s of free Apps ready for you to use on your LED from all of the top publishers and software houses.

Warranty – we also back our LED up with a 3 year on site warranty. What do you think of that Google?