Are you looking for a Smartboard alternative? What you must not do is replace a broken Smartboard with another Smartboard. That would be a crime against technology in our opinion.  In this post we’ll look at what alternatives to Smartboards there are and why they are better. We’ll even show you how they save your school $22 000!

Contents hide
1 What is a Smartboard?
2 How do I know if my Smartboard is broken?
3 What Smartboard Alternatives exist?
3.1 Regular TV and Wireless Mouse
3.2 Apple TV plus a Regular TV
3.3 Another Smartboard?
3.4 Interactive Projectors
3.5 Interactive Flat Panel Displays
3.6 Cost Savings – IFPDs are cheaper than you think!
4 Save your school $22 000!

What is a Smartboard? 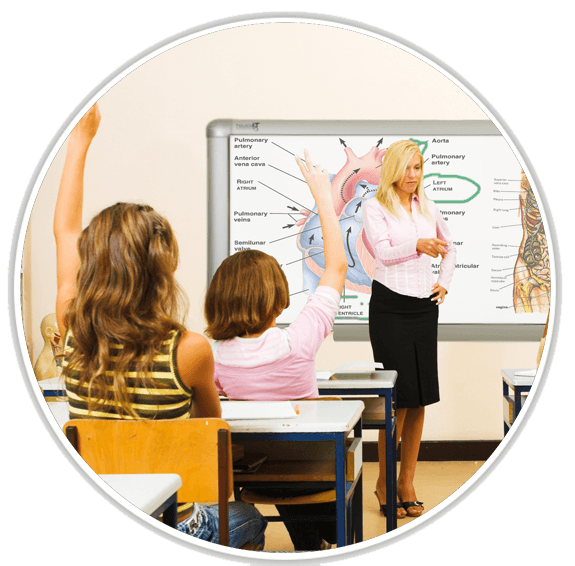 I should point out here that “SMART Board” with the capitalisation as shown here is a registered trade mark of SMART Technologies. Therefore, in this article, we are going to be referring to Smartboards and alternatives to Smartboards used in the generic sense meaning Interactive Whiteboards.

How do I know if my Smartboard is broken?

This would seem somewhat of a simple question to answer. My smart board is broken as it is not displaying my computer screen or is not responding to touch. Yes, this is clearly broken. However, some signs to look for if you think your Smartboards are reaching the end of their useful lives. Firstly, the touch will not remain accurate meaning that you will need to regularly calibrate the screen in order to make it work.

Secondly, your image on the screen will get fainter and fainter. This image degradation is of course due to the projector bulb and if you wish to continually replace bulbs, you could prolong the life of your Smartboard. This is not however, what we recommend doing and we’ll explain why below.

If you have had your Smartboard for 5+ years, it is definitely time to start to look at alternatives. What you do not want to do is replace a broken Smartboard with another Smartboard.

This setup doesn’t really give you any interactivity in the classroom. Yes, it is an alternative to a Smartboard, but in my opinion not a good one. That said, it is a very cheap option as you can pick up a wireless mouse for 20 bucks and a 65″ TV for $400. However, the benefits of whole class teaching and interaction are lost. This is just a way for a teacher to display their computer screen on a TV and move around the classroom.

Apple TV plus a Regular TV

This option did have a bit of popularity a few years back as Apple made a push for the education market. What it allows you to do is mirror your IOS device or OSX device up to a TV via the Airplay Mirroring option in the software. There is no control of your device from the Apple TV or regular TV and it is limited to Apple products only. It is a little bit more expensive than the previous option, but still cheap as Apple TV retails for around 100 bucks.

Don’t go there! – it is not worth it. The technology is old and you really should be looking at an alternative technology or option to replace your old Smartboard.

This is sort of the same answer as above. They rose to fame about 5 years ago but really still have the inherent problems of being a projection-based technology. Shadows, image quality, image brightness, degradation over time are all inherent problems of being a projection based technology. There is also the need for calibration which can become a tiresome process as we all know. They are cheaper than the Smartboard alternative and we think that this was the main and only reason that they found some traction in schools and Districts. Today, they are becoming less and less common.

The solution? Interactive Flat Panels of course, just like the TouchIT Rapide from TouchIT Technologies.

Did you know that 54% of all displays purchases in education on a world wide basis are interactive displays?

Did you know that in the USA, 70% of all display purchases in education are interactive displays?

There are so many advantages over Smartboards that they are really the only viable Smartboards alternative. Let’s take a brief look at some of the advantages that Interactive Flat Panels provide.

Interactive Flat Panels present a whole host of advantages over their predecessor. There is no shadow as the image is coming from the panel itself rather than a projector. There are no drivers needed for many of the IPFs on the market. The units are brighter, last for around 50 000 hours, have very few serviceable parts and to top it all off, most don’t need calibrating either. In short, the IFPs will last longer and ultimately have a lower cost of ownership than the IWBs that they are replacing.

Cost Savings – IFPDs are cheaper than you think!

Whilst you may think that the Interactive Flat Panel is going to be an expensive alternative to your Smartboard, this is not actually the case. Over the course of 5 years, projectors on average need to have their bulbs replaced twice. Bulbs cost roughly $100, so twice in 5 years is about $200 per projector. Plus, after that 5-year period the chances are that the useful life of the projector will have come to an end so it will need replacing – this is about $800.

The IFPD has no parts to replace and very little to maintain over its useful life. Lets look at what Smartboards cost in the classroom with some detailed examples below for a school or district:

This really should be food for thought. Is your school or district wasting this amount of money just trying to keep your Smartboards in service?